Is seeing a rocket launch on your space tourism bucket list? While Kennedy Space Center and Cape Canaveral Air Force Base are the most popular launch facilities in the U.S., people are increasingly traveling to a small town in California to try and see rockets take flight.

Vandenberg Space Force Base is the primary spaceport on the West Coast, and it’s easily accessible from Los Angeles and San Francisco. If you want to enjoy a Vandenberg launch viewing in person, this article breaks down everything you need to know to plan a trip.

This post was originally published in March 2019, and was updated in April 2022.

Where is Vandenberg Space Force Base?

Vandenberg Space Force Base is located on California’s Central Coast, north of Los Angeles and Santa Barbara. Parts of the space force base, especially where rockets are launched, are located in the Lompoc Hills as they rise up from the Santa Maria Valley floor at the coastal edge of the continent.

The nearest town is Lompoc (“lom-poke”), which stretches along the valley floor at the foot of the Lompoc Hills. If you’re planning a visit to Vandenberg Space Force Base to see a rocket launch, Lompoc is the town you can use as your primary base for exploring the region and hopefully seeing a launch.

Can You Tour Vandenberg AFB?

It’s possible to tour Vandenberg Space Force Base, but you’ll need to arrange it in advance – and these tours happen pretty infrequently, so it’s unlikely to overlap perfectly with a trip you’re planning to see a launch.

The VSFB website details that in 2020, there are two types of tours:

Tours are free, but you have to send your info to the base in advance to get access.

Can You Watch a Launch at Vandenberg?

In short, no, it’s not possible to do a Vandenberg launch viewing for most people. As an active space force base, only pre-approved personnel are allowed on the base at any time. This means that unless you are a member of the military on a mission or media, you’ll get turned away at the base gates.

Below, you’ll find some great viewing launch spots that aren’t located on the VAFB grounds. Some past viewers claim the view is actually better at some of these spots than you’ll get on base!

If you want to view a launch at Vandenberg, we’ve put together a map – as well as a list that breaks down each of the locations and details on what you can see.

Here are some of the top viewing sites from around Lompoc and near Vandenberg. This list is a collection of the top spots endorsed by locals and rocket launch chasers.

Surf Beach can be a great viewing spot, but it depends on a few things. First, Surf Beach has to be open – sometimes security will close the beach depending on the launch trajectory. Second, you’ll only be able to see launches when the marine layer stays out over the Pacific Ocean; if you see any fog near the coast, this won’t be a good viewing spot.

Along West Ocean Avenue is a great spot to view, depending on the launch SLC and weather. Be aware that you’ll be parking along an active roadway. You need to be sure to remove your car from traffic, but also don’t pull into any of the private property or farmland along the road.

The intersection of Santa Lucia Canyon Road and Victoria Road is a known viewing spot because it has a partial view of SLC-4 and a full view of SLC-3. Crowds can form here if the launch is from one of those SLCs and some of the views are obscured by vegetation, so show up early!

At its peak, Harris Grade Road rises about 600 feet above the surrounding area, giving you good elevation to see a launch from most of the SLCs. Harris Grade is farthest from the launch pads themselves, but the elevation and distance help reduce the chances you’ll be fogged out if the marine layer rolls in.

The Hawk’s Nest is the unofficial official viewing spot in the Lompoc area. You can find it on the map as “Azalea Lane” or “Camellia Lane” and at roughly 500 feet in elevation, it offers a pretty good view of most of the SLCs. This abandoned subdivision is a great viewing area as there are several roads where you can park and plenty of open space to stand and view.

Firefighter Road can be hit or miss as a viewing area for a couple of reasons. One, depending on the launch and payload, MPs may be present to turn people away. Two, there is a radiation hazard due to the high-powered equipment in the area.

This is a less common viewing spot, but it’s got a great view of SLC-2. This road is located right on the border of VAFB.

There’s no primary launch feed for Vandenberg launches. However, most of the launch providers do live webcasts:

You can usually log on 10-20 minutes before launch to see the webcast of the launch as it happens, even if you can’t travel to Lompoc or don’t have a great view.

If you’ve ever heard of launches from Vandenberg before the last few years, it’s probably for missiles. VAFB is run through the Department of Defense, and operates as a space and missile testing base. In the past few years, payloads launched at Vandenberg have remained – for the most part – top secret, classified, or highly technical. At this point, there are no plans to launch astronauts at Vandenberg, but that doesn’t make the launches at VAFB boring!

There are no official launch alerts or calendars for Vandenberg launches, but that doesn’t mean there’s no warning. Here are a couple of ways to know when a launch is happening at Vandenberg:

Together, you can use these options to piece together a good sense of when launches are actually happening at Vandenberg.

Now that you have a better sense about what launches at Vandenberg, it’s time to get oriented. There are six active launch facilities at VAFB; the three most popular are detailed below.  Note: If you’re new to the whole rocket launch thing, “SLC” is pronounced “slick.” The following SLCs would therefore be pronounced “slick 4 east,” “slick 6,” and “slick 10.” Now you sound like a pro!

SLC-4 has gained a lot of attention in the past few months, as anything Elon Musk touches is automatically interesting to people. SpaceX launches from both of the launch pads at SLC-4: SLC-4W and SLC-4E. This launch complex was previously used to launch Atlas and Titan rockets until 2005; SpaceX leased the complex for Falcon 9 rocket launches at SLC-4E beginning in 2013.

SLC-6 had a troubled start, as it was originally built for Titan III, Manned Orbiting Laboratory, and even west coast Space Shuttle launches. Unfortunately, none of these launches ever happened from SLC-6, and by 2006 it was refitted for the Delta IV rocket family, operated by United Launch Alliance (ULA). ULA also operates SLC-2 and SLC-3East.

SLC-10 is no longer active: the last launch here was in 1980 and the facility was named a National Historic Landmark in 1986. In its heyday, SLC-10 was used to test ballistic missiles and Thor boosters for over twenty years. Today SLC-10 is the Space and Missile Heritage Center and base museum. (If you arrange the quarterly tour option at Vandenberg, you’ll get to visit SLC-10!)

In addition to seeing a rocket launch, you might wonder what else you can do in Lompoc. Here are the details to plan the rest of your trip and spend your time in the area.

Where to Stay in Launch in Lompoc

Lompoc has several chain hotels, many of which can get quite busy when a launch is happening. These include the Embassy Suites, Hilton Garden Inn, and Holiday Inn Express. There are also some good Airbnb options, including this 3-bedroom house and this 4-bedroom home with a pool.

What to Do in Lompoc

Aside from attending a Vandenberg launch viewing, what else can you do in Lompoc? Turns out, there’s a fair amount!

Aside from Vandenberg launch viewing, Lompoc is a great area for a few other space experiences.

Have other questions about Vandenberg launch viewing in Lompoc? Let us know in the comments! 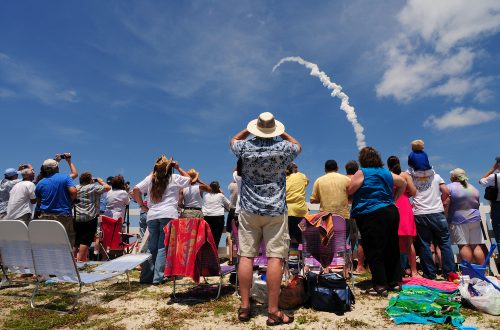