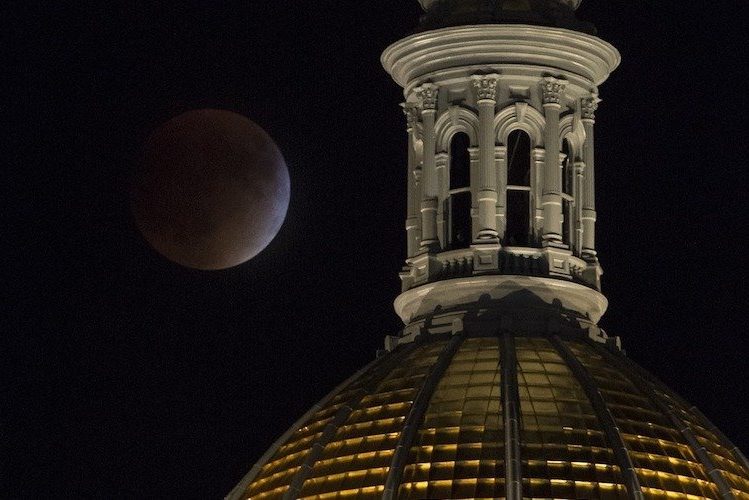 At 5,280ft above sea level, Denver has an obvious advantage when it comes to stargazing: extra elevation means clearer night skies! The capital of Colorado has other advantages that make it a stellar stargazing destination with wild mountains to the west, sweeping plains to the east, and passionate locals who protect and love the outdoors.

I’ve been fortunate to go stargazing near Denver many times in the decade my family lived in the area. Having that extra mile of elevation really does help reduce the impact of the atmosphere on the quality of the night sky – as do the clear, clean air you can enjoy both hiking by day and stargazing at night.

Whether you call Denver home or are planning an upcoming trip, make sure your itinerary includes a few nights to get out of the city center and enjoy the darkness of the Colorado night. (Need a guide to the city? Check out this comprehensive local’s guide to Denver.)

This post was originally written in December 2017 and was updated most recently in May 2022.

The Best Spots for Stargazing in Denver

With mountains to the west and plains to the east, Denver is well placed for stargazing – especially when you consider that it’s also at a good altitude to help cut down light pollution. Here are some of the best spots for stargazing in Denver, and other stargazing spots within 1-2 hours of the city.

Everyone knows Red Rocks is great for concerts, but the big open space is also good for stargazing on nights when there are no shows happening. Because of its proximity to city lights, you’ll still face some light pollution, but it’s a good easy-access spot to try on a clear night.

Lookout Mountain, a short 30-minute drive from Denver, is a local favorite among stargazing spots. Capitalizing on the mountains to the West, you can park anywhere along the road and step out of your car with a guaranteed view.

Located at Denver University, Chamberlin Observatory is a beautiful building with historic significance – even if you only visit during daylight hours. The Observatory hosts regular public nights and open houses, and you can peer through the 1894 Alvan Clark-Saegmuller 20-inch refracting telescope during your visit. (It also makes the list of my best observatories in the U.S. in 2022, so it’s really a great spot all around.)

Stargazing Spots Within One Hour of Denver

25 miles south of Denver, Sedalia is a small, unincorporated town of just over 200 residents. Nestled in the foothills of the Rocky Mountains, it’s a perfect destination to escape the lights of the big city. If you’re up for a hike, head to the Devil’s Head Fire Lookout trail for a 2.7-mile trail that takes you up 940 feet in elevation to an even better view of the stars.

Located in Boulder, Sommers-Bausch Observatory (or more affectionately, “SBO”) is operated by the Department of Astrophysical and Planetary Science at the University of Colorado. It is home to three telescopes, a 16-inch Cassegrain, an 18-inch, and a 24-inch Cassegrain. When not hosting astronomy classes for the university, the Boulder Astronomy and Space Society hosts events, and there are open observing nights on Fridays (weather permitting).

Golden Gate Canyon Park is a great spot to experience the outdoors, day or night. A 45-minute drive west of Denver, there are also some excellent stargazing spots. Notably, these include Panoramic Point Scenic Overlook and Aspen Meadows, both of which locals report offer unincumbered night sky views. If you want to enjoy a full night of stargazing, book a cabin or yurt near the park.

As you’ve likely guessed, having the mountains close at hand provides infinite opportunities for stargazing. One hour from Denver, Mt. Evans is a local favorite for stargazing, with several great spots in the surrounding area.

Most people drive Loveland Pass on their way to the famous resorts in the area… but did you know it’s also a great stargazing spot? If you stop near the apex of the pass (nearly 12,000ft in elevation), you can get an amazing view of the stars, away from the blazing lights on nearby slopes.

Garden of the Gods

Unsurprisingly, Garden of the Gods is a stunning spot for stargazing, even given its proximity to light pollution and Colorado Springs. The geologic formations provide a reminder that our planet is truly unique and beautiful.

Most of the destinations in this guide take advantage of the mountains to create ideal stargazing conditions. Jackson Lake State Park is the opposite: northwest of Denver, out on the plains, this state park is well away from city lights and the lake affords you the opportunity to see star reflections too. You’ll need to arrange camping if you want to stay overnight in the state park.

In the foothills outside Fort Collins, Horsetooth Reservoir is one of the best stargazing spots in this part of Colorado. The long, tall lake provides an excellent barrier against nearby light pollution, and open spaces to admire the sky. Reservoir Ridge Natural Area is a good place to base your stargazing expedition.

High in the mountains near Estes Park, Rocky Mountain National Park draws visitors from around the country in search of mountain trails and wildlife. By night, the sky above the park comes alive with seemingly infinite stars. The park has five campgrounds to choose from.

Other Notable Stargazing Spots in Colorado

The towns of Westcliffe and Silver Cliff are Colorado’s first international dark sky communities. After earning its designation in 2015, the community built Smokey Jack Observatory, where stargazers and lovers of all things astronomy can enjoy prime views of the night sky. Throughout the summer, visitors can even spot a dazzling spectacle of stars and the Milky Way over the Sangre de Cristo mountain range in the many Star Parties the local International Dark-Sky Association organizes.

With a name like “The UFO Watchtower,” it’s no surprise that people visit this spot to look at the night sky. Located in the flatlands near Center, Colorado, 3.5 hours from Denver, this unusual building is surrounded by space that is perfect for stargazing. If you’re looking for a bit of amusement and want to see ‘what a real UFO looks like,’ admission to the ‘Watchtower’ is $2 per person or $5 for cars.

Rising incongruously from the scrubby lowlands and foothills of the surrounding countryside, Great Sand Dunes National Park is a unique Colorado destination in its own right. By night, the 150,000-acre park is isolated from light pollution and perfect for stargazing. Free ranger programs in the summer often focus on the starry skies above.

As one of the darkest places remaining in the United States, Dinosaur National Monument is home to skies dark enough that the stars, planets, and Milky Way shine in all their glory. It was recently designated as an International Dark Sky Park and has numerous spots offering privileged views of the night sky: the south end of Split Mountain Campground, the Green or Yampa Rivers, Canyon Overlook along Harpers Corner Scenic Drive and Deerlodge Park near the eastern edge of the monument. The park is open 24 hours, so you don’t have to spend the night stargazing.

Located between Gunnison and Montrose, Curecanti National Recreation Area is one of the newest International Dark Sky Parks in Colorado. Curecanti is a natural beauty, encompassing Blue Mesa, Morrow Point, and Crystal reservoirs. Thanks to its isolation and lack of nearby urban centers, Curecanti has managed to preserve expansive dark skies. The park’s staff also works hard to educate visitors on the night sky, presenting astronomy programs at the Elk Creek campground and the Gunnison Valley Observatory.

How Good is the Stargazing in Denver?

Denver is – as cities go – a reasonable destination for stargazing; like most cities, you’ll need to get out of the city to see the stars in their full glory. Compared with other cities, Denver has excellent natural surroundings that play to its advantage:

One of the biggest detriments to stargazing in and near Denver is pollution; because of the geographic placement of the city, a ‘brown cloud’ develops over the city. This can make light pollution worse and cause visual obstruction to the stars.

Best Times of Year to Go Stargazing in Denver

With an average of 300 days of sunlight per year, cloudy skies are one of the least likely issues to interfere with stargazing. Instead, you’ll need to get away from light pollution – but that isn’t hard to do at one of the spots listed above.

The best times of year to visit Denver are April to May and September to October. In those windows, you can see the Lyrids meteor shower (late April), Eta Aquarids (early May), Draconids (early October), and Orionids (late October), in addition to other astronomical events:

Can You See the Milky Way in Denver?

Within Denver, like most cities, seeing the Milky Way is virtually impossible. Unlike many other cities in the U.S., Denver is relatively close to the dark skies needed for Milky Way views. Within 1-2 hours, you can easily drive to places where the milky way is very visible.

Other Space Related Experiences in Denver

If you’re familiar with aerospace companies, you already know that major industry players like Lockheed Martin, Raytheon, Boeing, and Sierra Nevada Corporation all have offices or headquarters in Colorado – many near Denver.

With a strong aerospace and aviation background, there are some great space-related experiences to enjoy while visiting Denver:

Do you have other questions about stargazing in Denver? Let me know in the comments, and I hope you have clear skies whenever you head out to see them! 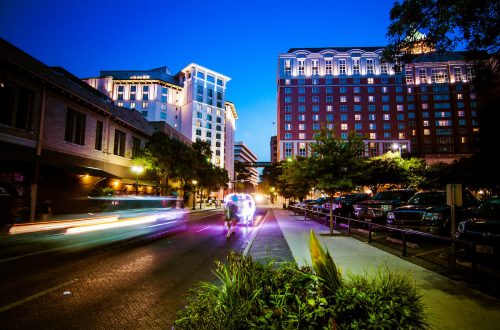 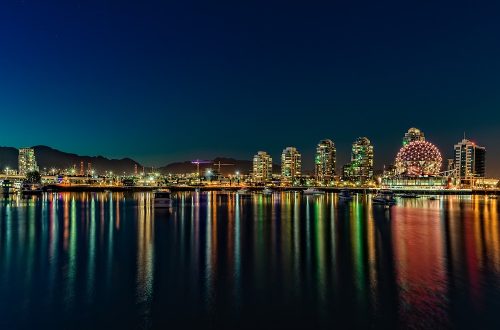