Russia is perhaps the least-visited aurora borealis destination in the northern hemisphere. Geopolitical tensions make it cumbrous for most travelers to visit Russia at all, much less to see the aurora. For those willing to complete necessary visa paperwork and plan an itinerary in full ahead of arrival, you might be pleasantly surprised viewing the northern lights in Russia.

Like Canada, Russia is a large country. Those travelers hunting the aurora here should narrow their focus and itinerary to a specific region in order to have the best chances of seeing the northern lights. While travel to Siberia sounds compelling, it’s actually more difficult than most travelers are willing to undertake in order to see the northern lights. This is especially the case when there are more easily accessed destinations in western Russia.

All you need to do is get away from the city lights of Moscow and St. Petersburg during the dark winter months. Read on for these places, to learn the science of the northern lights, and other important details for traveling to see the northern lights in Russia.

Featured photo credit: Ajith Kumar via Flickr
This post was originally published in December 2019, and updated most recently in November 2022 for this winter.

Editor’s Note: Portions of this article are reproduced with permission from Dark Skies: A Practical Guide to Astrotourism. If you like what you read, grab your own copy here.

If you’re unfamiliar with the science behind the northern lights, here’s a quick breakdown. In short, particles from the sun – called solar wind – are expelled from our nearest star.

When these particles reach earth, they interact with atoms in our own atmosphere. Excited by their interaction with solar wind, these atoms are excited and release light – the northern lights! (Or the southern lights, if you’re in the southern hemisphere.)

Depending on the atoms and elements in the atmosphere, the aurora may vary in color from green to red, or from purple to white. The colors of the aurora don’t depend on where you see them. But, their intensity and how high they appear in the sky is based on your geography. The closer you can travel to the aurora oval (which is roughly 65–70 degrees north or south of the equator), the more ‘overhead’ the northern lights appear.

In Russia, you can travel to some destinations directly under the aurora oval. Or, you can watch the aurora dance near the horizon from destinations further south. As you’ll see, the choice is yours. It all depends on your budget and how far you’re willing to travel!

When to See the Northern Lights in Russia

As you plan your trip to Russia to see the northern lights, it’s important to keep seasonality in mind. Because northern lights destinations in Russia are far north on the globe, they are more impacted by varying daylight throughout the year. That means that in the summer, days are long and nights are short. Conversely, winter months bring prolonged darkness… ideal for seeing the aurora!

The best time of year to see the northern lights in Russia is between the mid-September and late March. Because the September and March equinoxes are peak times for aurora activity, we recommend visiting near those dates (September 20 and March 20) each year.

The Best Places to See the Northern Lights in Russia

Now that you’ve got the basics down for understanding the aurora and when to see them, here are the best destinations to see the northern lights in Russia.

Murmansk is generally considered one of the top destinations in Russia for seeing the aurora. This is due to its high latitude and proximity to major cities like Moscow and St. Petersburg. In fact, most guided tour options will visit Murmansk as part of the itinerary.

Located on a similar parallel to Tromsø, Norway and near Russia’s border with Finland, Murmansk offers similar aurora viewing conditions with far fewer crowds. By day, you can explore local history and cultural museums to get a sense for Russian history.

Murmansk is a roughly two-hour flight from Moscow or St. Petersburg, making it an ideal destination for visitors.

Located far north near Russia’s coastline on the Barents Sea, Naryan-Mar is a vestige community from an industrial era in  Siberian history. A local monument stands in town to remember the first Russian city in the arctic, Pustozersk, which is accessible only by snowmobile during the winter months.

This community is home to roughly 20,000. It’s also a top destination to learn about the indigenous Nenets culture, and Russian history in the Arctic.

It is a 2.5-hour flight from Moscow to Naryan-Mar; daily flights are offered year-round on UTair.

Further east into Siberia, Salekhard is another community where you can base yourself to see the aurora in winter months. Home to roughly 50,000, Salekhard is located on the under the Auroral Oval, making it ideally placed to view the aurora.

By day you can learn about indigenous and Russian history in the arctic, as well as the fishing, dairy, and timber industries that help this city thrive despite challenging winter conditions.

It’s a three-hour flight from Moscow to Salekhard.

Arkhangelsk, which roughly translates as Archangel, is a Russian city on the Dvina River near where it meets the White Sea. While not as far north as some of the other locations on this list, it’s still possible to see the northern lights here between mid-September and late March each year.

If you choose to try and see the aurora in Arkhangelsk, it’s a two-hour flight from Moscow.

How far north do you want to go, in order to see the aurora in Russia? The Taimyr Peninsula, also called Poluostrov Taymyr in Russian, is almost as far as you can go!

It’s a four hour flight from Moscow to Norilsk, and then you’ll need to drive to one of the main villages to base yourself for your northern lights expedition.

This might seem like a long haul, but if you’re heading to somewhere that experiences winter 235 days a year, it means you can be basically guaranteed to see the northern lights all season long.

If you also love winter snow sports, Kirovsk is a great aurora destination. By day, you can enjoy some of the small community’s several mountain resorts, and at night look up to see the aurora dancing overhead.

The easiest way to reach Kirovsk is by flying to Murmansk (two hours) and driving three hours south.

Located on the western shores of Lake Onega in European Russia, Petrozavodsk is a well-established destination for Russians and Eastern European tourists; this means there’s plenty of infrastructure to make sure you have a comfortable stay during your aurora-hunting trip.

From Petrozavodsk, you can look north across Lake Onega to try and spot the northern lights. Be aware that the aurora may be visible much closer to the horizon since Petrozavodsk is much further south than other destinations on this list.

In the far northern part of Komi Republic, it’s not uncommon to see the northern lights in Russia between early September and mid-April. Vorkuta will be your base if you travel to this area; during the day you can explore several Soviet era landmarks in the town.

To reach Vorkuta, you can take a three-hour flight from Moscow, or board a 44-hour train ride that changes in Nizhny.

If you have your heart set on visiting Siberia as part of your trip to Russia, Yakutsk should be on your itinerary – it also gives you a fantastic chance to see the northern lights in Russia between September and April.

Yakutsk is one of the largest cities in Yakutia, the the region the reindeer-herding Yakut people call home. This is a great place to experience traditional Siberian culture, but be aware that you may be required to book a tour or have a guide to visit certain parts of the region.

If you’re trying to see the northern lights in Russia, it helps to have an alert service so that you know the forecast and when the aurora might be visible. Here are two good sites to bookmark:

Remember these tools can’t guarantee the aurora will be visible on any night – but they can help you figure out which night(s) you’re willing to bundle up, or when to try and book a tour.

Tours to see the Northern Lights in Russia

Speaking of tours, guided tours to see the aurora in Russia are typically longer in length than at other destinations; many combine sightseeing in major Russian cities with smaller towns or destinations where the aurora is better visible.

Most independent travelers to Russia visit Moscow or St. Petersburg, so where appropriate, consider adding additional travel time from these major cities to destinations where you can better see the aurora borealis.

Have other questions about seeing the northern lights in Russia? Let me know in the comments. 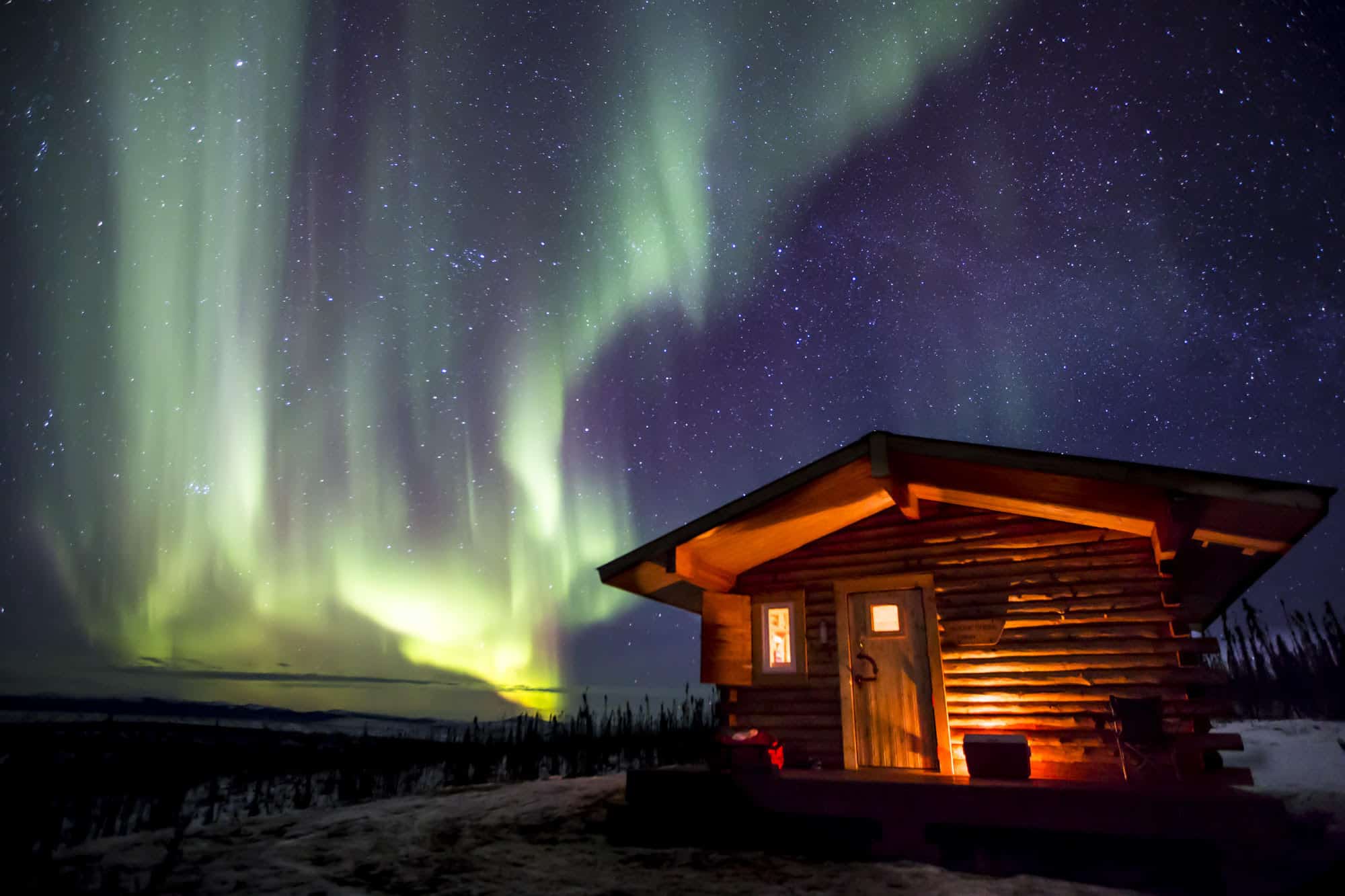