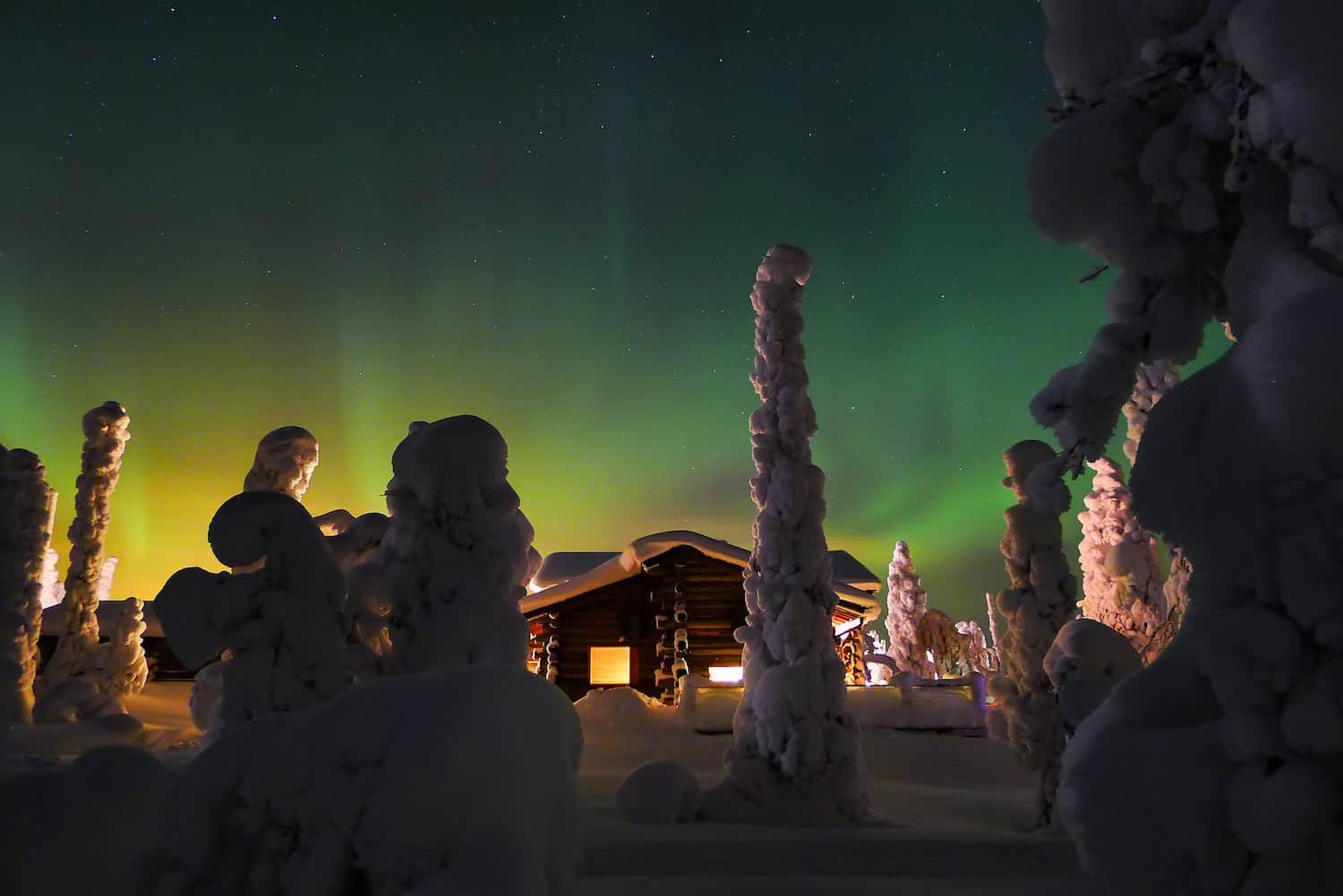 Among Scandinavian countries, Finland is often overlooked. People love Denmark with its delicious food, Sweden with its striking design, and Norway is one of the world’s top aurora destinations. Meanwhile, Finland is easily just as good (or maybe better) when it comes to seeing the northern lights – plus you can enjoy dog sledding, sauna breaks, and delicious Finnish pastries when you’re not out looking for the aurora borealis!

If you’ve decided to go a bit off the beaten path in trying to see the northern lights, Finland might be the perfect destination for you. Read on to learn everything you need to know about the northern lights in Finland, plus where to go, when to see them, and popular tours that increase your chances of an unforgettable aurora experience.

Featured photo by Timo Newton Syms via Flickr
This post was originally published in July 2018, and was updated most recently in September 2022 for the coming winter.

In fact, the northern lights are caused by the sun. When particles are emitted by the sun and strike atoms in the earth’s atmosphere, these atoms light up, producing the beautiful colors you can see in the aurora borealis. Speaking of translations, this classical name for the northern lights was coined by Galileo, and means “north wind.” As you can only see the aurora borealis in the northern hemisphere, and it dances like the wind across the sky, this name makes sense too!

When to See the Northern Lights in Finland

While it would be great to see the northern lights year-round in Finland, part of what makes the experience special is that you can only experience it during certain parts of the year. As you can see from the above photo, there’s a clear season where you can see the aurora – but it’s not limited only to winter.

Read on to learn about the different seasons in Finland and your chances of seeing the aurora in each.

While summer is a great season to visit if you want to experience Finnish lake culture and explore the country under a beautiful blanket of green foliage, plan to visit on the opposite half of the year for northern lights viewing opportunities.

The Best Places in Finland to See the Northern Lights

Read on for some of the top spots if you’re planning an aurora trip to Finland, especially those in the northern part of the country: Lapland.

The city of Rovaniemi is among the best places in Finland to see the Northern Lights. This natural wonder can be found here up to 150 times a year. You might have to walk a little way outside the city for the best view, but it can sometimes be seen even within its limits.

Utsjoki is a town in far northern Finland, near the Norwegian border. The whole municipality is home to only about 1,200 people, so the area is largely undeveloped and the skies overhead are astonishingly dark. Seeing the northern lights from Utsjoki and the surrounding area is very common during the winter months. In the event of days where it’s not possible, you can easily drive to Norway for a better view!

Along with its famous Snow Castle, the town of Kemi is in the perfect position for viewing the Northern Lights. The best way to view them is by renting one of its glass villas. These are located on the outskirts of town and provide all the modern comforts a person could ask for while you wait to see this amazing phenomenon.

If roughing it is more your style, you might consider giving Nellim a visit. The residents of this small, lakeside community claim it’s the best spot in Finland to see the Northern Lights. In this place, you can go dogsledding by day and Aurora hunting by night.

Kittilä is a popular resort town in Finland. There are many activities available here from skiing to dogsledding to snowmobiling. There are also tours available where you can participate in a number of different activities as you go searching for the Northern Lights in the evening.

Saariselkä is another popular tourist area located in the mountains of Finland. The Northern Lights can be seen from here up to 200 nights per year. You are likely to see it on almost any dark, clear night during the winter months.

Ivalo is a small village just outside of Saariselkä. From here, you can take a tour in which you go hunting for the Aurora Borealis. The tour is led by a Northern Lights expert that can take you to all the best spots while teaching you how to photograph this natural wonder.

Sodankylä is a small town surrounded by wilderness. It’s a popular place for ice fishing, snowmobile driving, snowshoe walking, and other various activities. It’s lack of light pollution also makes it an ideal spot to view the Northern Lights.

This is another popular national park in Finland. One unique aspect of this park is that it has numerous wooden cabins that are free to use by hikers. This is excellent for those who’d like somewhere to settle down while waiting for the Northern Lights.

Kakslauttanen is an arctic resort located only thirty minutes away from the airport. It features a number of unique accommodation choices, including log cabins, snow igloos, and glass igloos. Its glass igloos, in particular, are a fantastic option for those who’d like to watch the sky in comfort.

Kilpisjarvi is a very small village located near the northernmost point of Finland. Its isolation from the rest of civilization makes it very easy to find the Northern Lights. From here, you can take a snowmobile tour to the borders of Sweden and Norway for one of the best Aurora Borealis viewing areas.

Muonio is another small village in northern Finland. It’s located directly under the aurora oval, which means you won’t have any trouble seeing the Northern Lights. In fact, you can see them in the sky on almost every other night from Muonio.

Can You See the Northern Lights in Helsinki?

Maybe you only have a short time in Finland or are only planning to visit Helsinki. I get it – vacation time is hard to come by! If you can’t plan a trip further north to see the northern lights from one of these destinations, you might wonder if it’s possible to see them at all.

It is possible to see the northern lights in Helsinki, but as is the case with urban stargazing, the conditions have to be just right. There must be a clear sky and a strong solar storm that produces aurora bright enough to be seen through the light pollution. As Helsinki is home to over 600,000 and snow amplifies the light pollution of the city, it’s a special night when you get a really great aurora show – but it’s definitely possible!

There are several good northern lights forecast tools you can use in Finland:

When you do see the northern lights, don’t be surprised if you’re a bit speechless – even if you’ve seen them before. They’re no view on earth quite like the aurora, and you certainly won’t forget this experience!

If you prefer to visit a new place with a guide or as part of the tour, you can still see the northern lights! Here are some of the coolest tour options in Finland:

You can also find other tours by searching Google, if none of these seem perfect for you (but seriously, ice floating? dog sledding? What more do you need!).Do you have other questions about seeing the northern lights in Finland? Let me know in the comments! 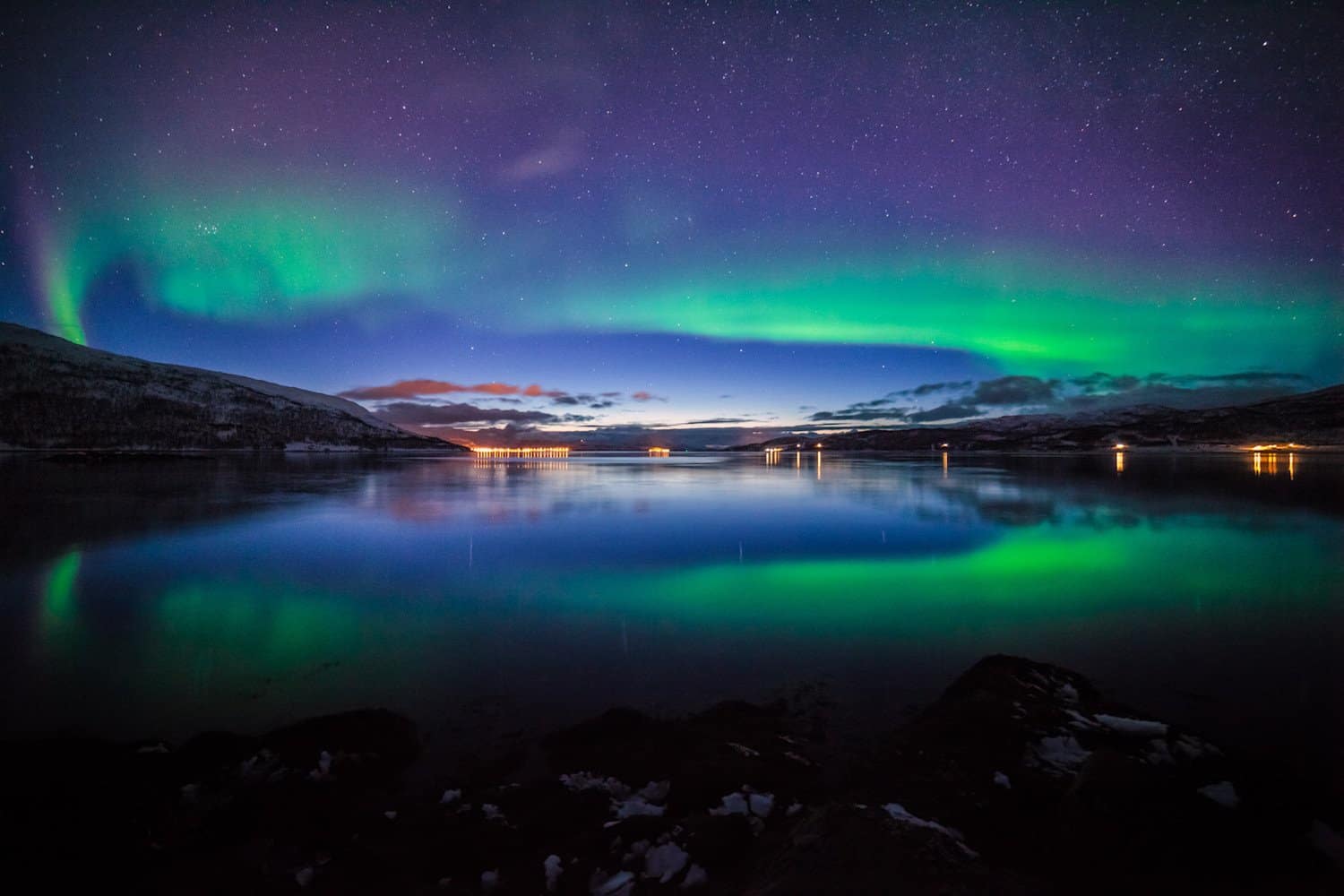