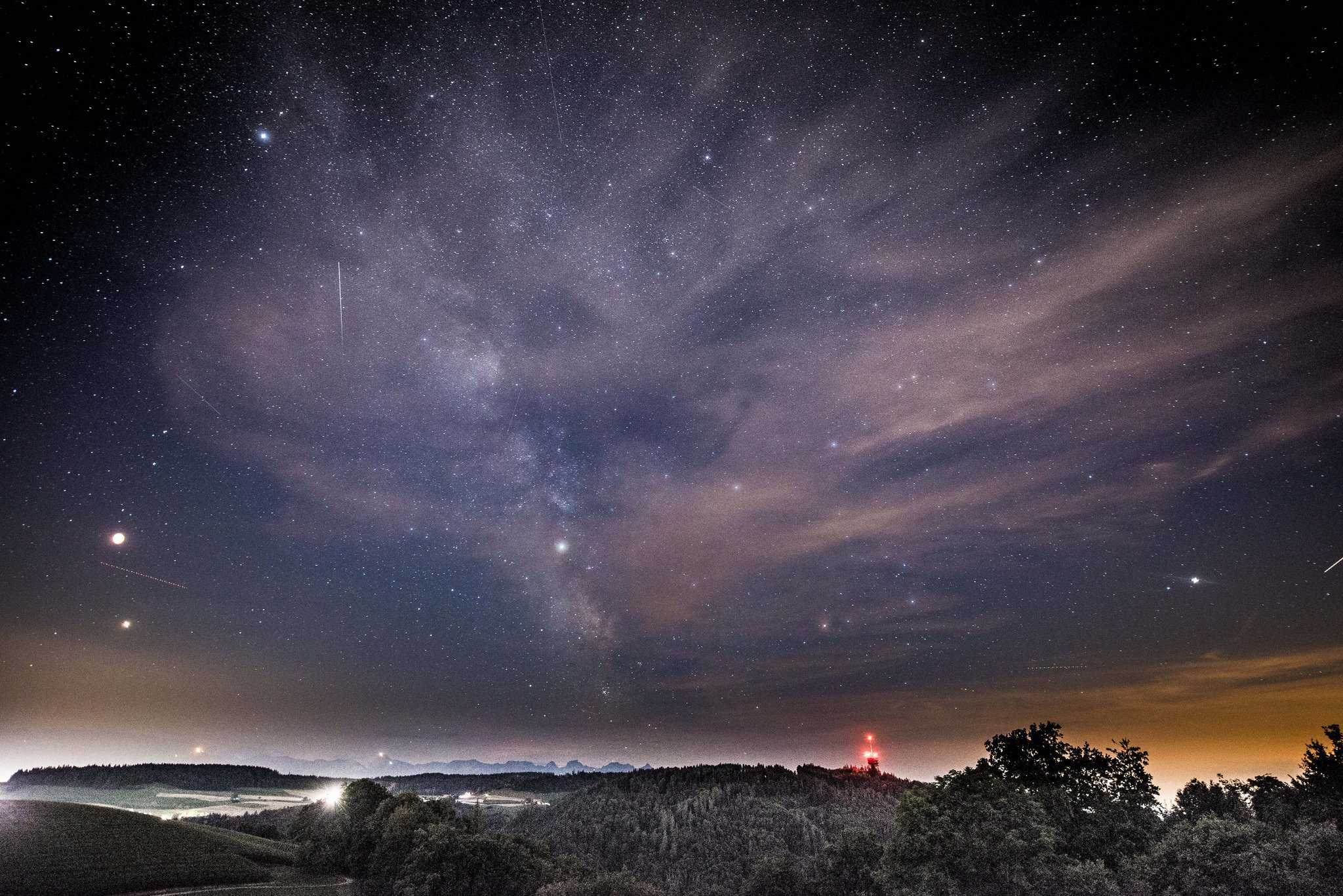 While December is a month of extremes – cold and dark in the northern hemisphere and opposite in the southern – it’s also one of the best months of the year for amateur astronomers and stargazers. In 2020, there is a plethora of astronomical events and sights to see in the December night sky. From a number of meteor showers to an eclipse and the best Great Conjunction we’ll see in our lifetimes, December is a great time to get out and see the wonders of the night sky.

If you need equipment to help you view some of this month’s events, consider investing in one of our recommended telescopes for every budget. These make a great holiday gift! From the Meade Polaris 130 (under $200) to the Orion Atlas 8 EQ-G GoTo ($2000), you can find one for your astronomy interest and budget.

Read on for all of the December night sky events you can see in the coming month!

While December is best known for two other meteor showers – the highly active Geminids mid-month and the lesser but still impressive Ursids in late December – the first meteor shower of the month is actually on the night of December 2nd. On this night, the Phoenicid Meteor Shower peaks with only a small number of meteors per hour.

For most viewers in North America, the Phoenicids will be below the horizon and not visible. This is because the radiant point in the constellation Phoenix is best visible from nearer the equator and the southern hemisphere. For stargazers in Central and South America, Southern Europe, the Middle East, Africa, Southeast Asia, and Oceania, this is a fun chance to try and spot a different meteor shower this month.

If you’re ready for another chance to spot meteors, consider heading out on the night of December 5th. This night is also the peak of the φ-Cassiopeid meteor shower which is right in the same part of the sky as Comet Borisov may be spotted.

To try and spot φ-Cassiopeid meteors, look for the radiant point in the constellation of Cassiopeia in the sky. You may spot only a few meteors per hour from this point. Based on the earth’s rotation on the night of December 6th, the majority may be short-tailed as the enter right “at” us.

Unfortunately, the moon won’t be much past its recent full phase on November 30th. It will likely intrude on stargazing and meteor-spotting until December 7th or so.

Are you tired of meteor showers yet? On December 6th there’s yet another meteor shower at its peak: the little-known Puppid-Velid meteor shower. Radiating from a point between the Puppis and Vela constellations in the sky, you can potentially spot a few meteors meteors per hour this night. For the best odds, plan to be out stargazing between midnight and 3:00am local time.

For southern hemisphere stargazers, here’s another meteor shower for you! For the whole night of December 8th, look for meteors from the radiant point in Monoceros. The best meteor-spotting prospects will be between 1:00am and 3:00am local time.

December 11th is the peak of yet another meteor shower in December: the σ-Hydrid meteor shower. On this night, you can spot a few meteors per hour from the radiant point in the constellation Hydra. The best time to try and spot meteors will be in the pre-dawn hours from 2:00am to 5:00am, local time, on the morning of 13th. However, you should be able to see some meteors after sunset on December 12th.

As the Moon reaches its new phase this month, there’s a unique opportunity to spot it in very close proximity to Venus in the pre-dawn hours on December 12th. Venus and the Moon will pass within 45 arcminutes (<1°) of each other in the sky. This is a great opportunity to pull out your astronomical binoculars to spot the sliver of crescent moon (just 4% illuminated) as it appears close to bright Venus.

If you haven’t seen any of the meteor showers so far month, December 14th is the night for it! On this night, the Geminid meteor shower will peak with up to 120 meteors per hour – it’s a great show!

Look for meteors coming from the constellation of Gemini. Use the bright stars of Castor and Pollux to spot the constellation in the Northeastern sky (for most viewers). Meteor activity is expected to peak around 11:00pm local time.

Best of all, the moon will be completely new on the night of December 14th – that means it’s the best night of meteor-gazing in all of 2020!

Click here for our full guide of how to see the 2020 Geminids meteor shower.

Speaking of new moons, the December new moon is also exciting for another reason: a total solar eclipse will be visible across parts of the earth!

The path of totality for this eclipse is very similar to the one last December, which cut across parts of Chile and Argentina. This year, the path of totality will be further south, passing over parts of Patagonia. It’s sure to be an adventure traveler’s ultimate bucket list experience!

If you want to learn more about this solar eclipse, we have a whole guide about how to see the December 14, 2020 total solar eclipse.

For most northern hemisphere viewers, the Comae Berenicid meteor shower will be below the horizon. Southern hemisphere stargazers can enjoy this meteor shower at its peak on the night of December 15th. On this night, you can see up to 3 meteors per hour from the radiant point in the constellation Leo.

As Jupiter and Saturn move ever closer in the night sky (more on that below!), they’ll both appear in close proximity to the Moon on the night of December 16th. On this night, they’ll all appear within 2°56′ of each other in the sky; the moment of closest approach will be around 11:00pm Pacific (time zone converter).

Meteors, meteors, everywhere! While the December Leonis Minorid Meteor Shower is one of the lesser-known and least active of the month, it’s still a fun astronomical event if you find yourself out for a winter solstice celebration and the skies are dark.

On the night of December 19th, look for up to 3 meteors per hour from the radiant point in Leo Minor; for most viewers it will be low in the northwestern sky.

For the northern hemisphere, December 21 marks the winter solstice. We’ve got a great list of winter solstice celebrations to inspire you on the longest night of the year… Or you could just plan on some stargazing as the moon will be only 18% illuminated.

In the southern hemisphere, it’s the shortest night of the year – the summer solstice. We have a list of cool summer solstice celebrations if you’re curious about those too!

As previously hinted, Jupiter and Saturn have been getting mighty cozy in the sky – it’s been hard not to notice the two gas giants shining brightly near each other over the past few months, right?

On December 21st, the two will reach what’s called a “Great Conjunction.” This refers to the times when Jupiter and Saturn appear close to one another in the sky – it only occurs every 19.6 years due to the two planet’s orbital paths in the sky.

This particular Great Conjunction of Jupiter and Saturn is especially great – it’s the closest the two planets will appear in the sky since 1623, at just 6.1 arcminutes (0.1°) apart. This means you can view both planets in the same field of view from a telescope, so break that bad boy out for this one!

Read more about how to see the Great Conjunction of Jupiter & Saturn in our guide.

While the Geminids are the star of December’s meteoric events, don’t forget that the Ursids occur too, peaking on the 22nd this year. The Ursids occur from December 17th to 26th. On the night of peak activity (December 22nd), you can see a maximum of about 10 meteors per hour. This may seem low after the Geminids, but the Ursids are still a respectable and consistent meteor shower late each year.

The Ursids radiate from the constellation Ursa Minor. Look for the North Star to find Ursa Minor, and then scan the whole northern sky to try and spot these meteors as they occur. As Ursa Minor is a circumpolar constellation, it’s possible to try and spot meteors the entire night. Also, the moon will be almost at its new phase the sky will be exceptionally dark.

Do you have questions about these December night sky events? Let us know in the comments! 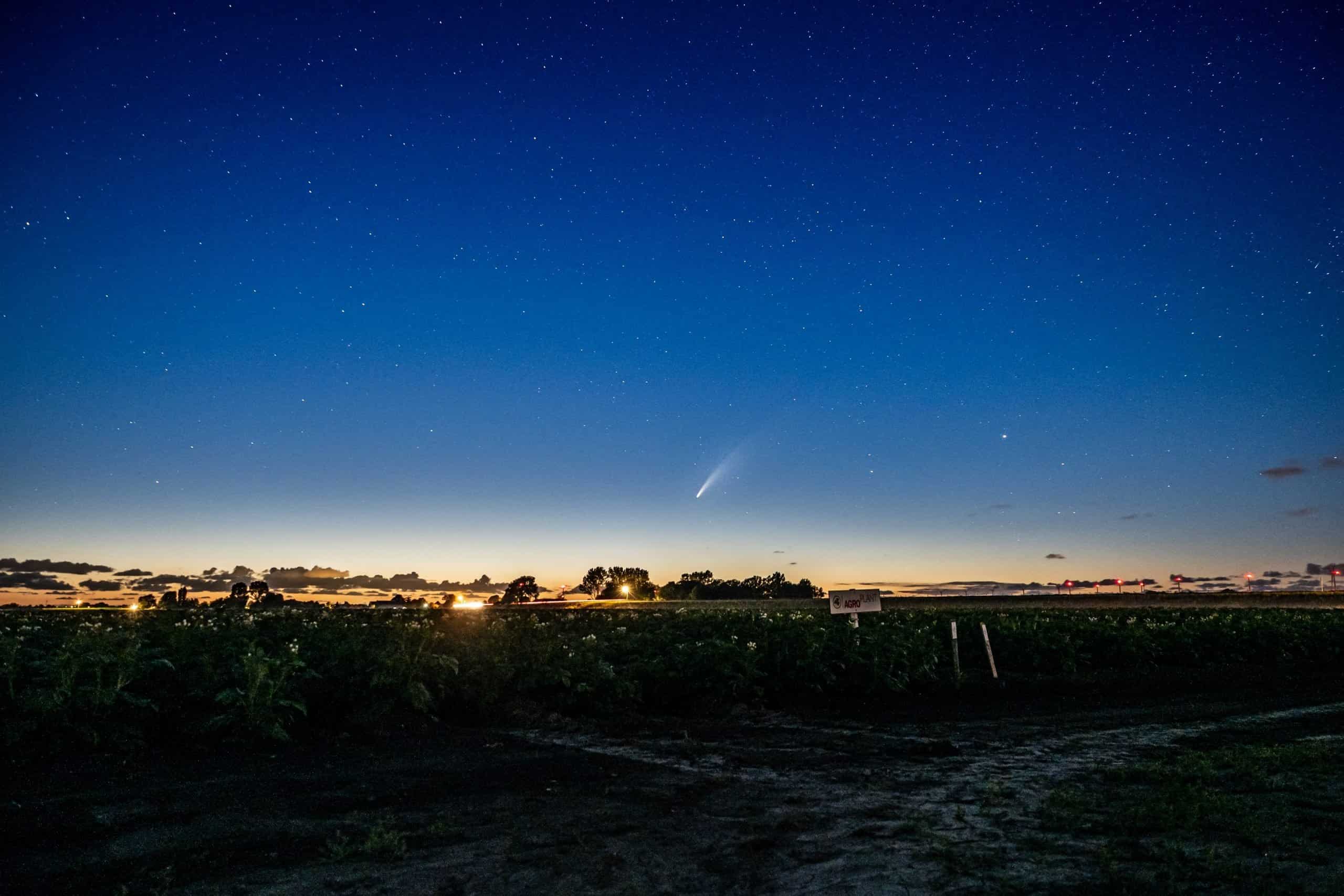