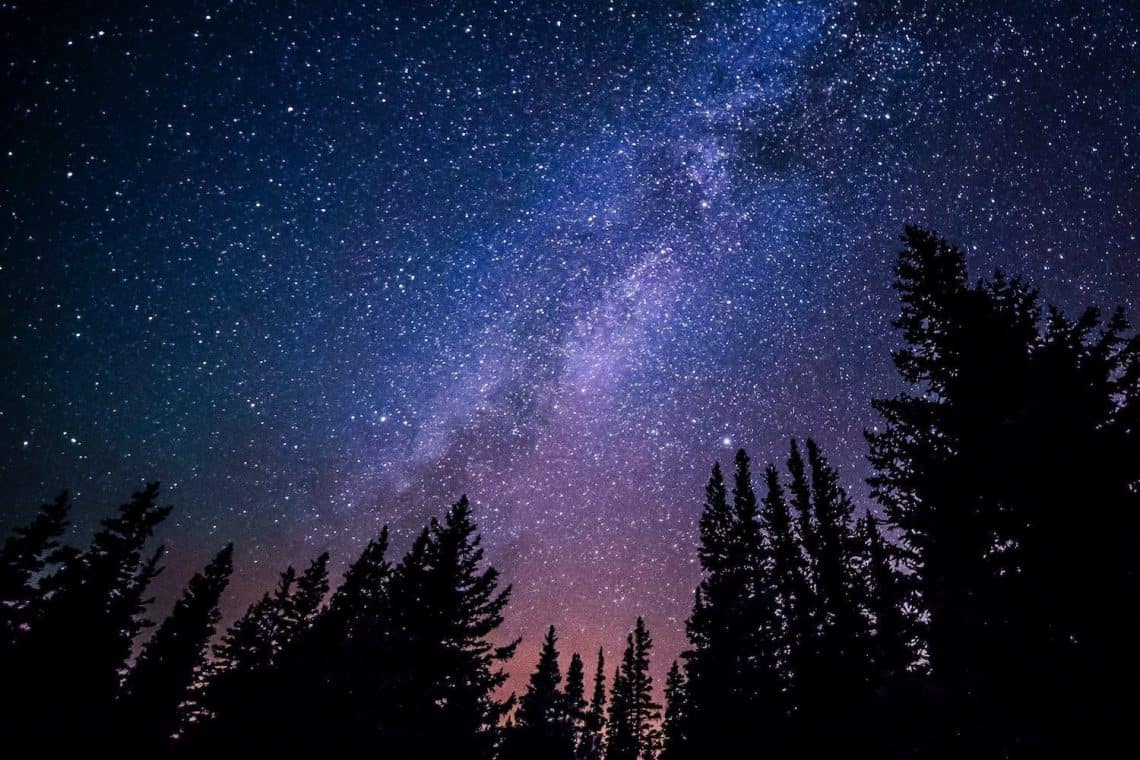 While most people are setting resolutions to mark the new year, why not set one to get out and enjoy the amazing natural resource of the night sky? 2021 is going to be a great year for astronomical events – and in this post, we’re rounding up 21 of the best astronomical events in the 2021 night sky.

If you’re just starting out in astronomy, using planets and stars to ‘star hop’ and find what you’re looking for is a good way to get familiar with the 2021 night sky. You’ll notice that for some of the astronomical events we mention, we recommend using the moon to help find the astronomical sight; in other cases, you might want to use a night sky app. We love Night Sky for iOS.

For some of these, you can spot them with your own eyes. For others, you’ll need stargazing equipment like a telescope or binoculars. We’ve got recommendations on the best telescopes for any budget.

Ready to learn about the best astronomical events in the 2021 night sky? Read on for the top 21 night sky events happening all year long.

Did you know? These are just a few of over 130 astronomical events worth seeing in 2021! There are many other interesting events and good nights for stargazing all year.

Start stargazing in 2021 with an attempt to see distant Uranus, thanks to the help of Mars. On the night of January 21st, Mars and Uranus will be in conjunction, and will have a close approach of just 1°43′. This is a great opportunity to use the Red Planet and your telescope to spot distant icy blue Uranus nearly 1.77 billion miles away.

Mars and Uranus will be in the constellation Aires on January 21st.

What’s the Messier Marathon? For those not familiar, this astronomy “event” is popular among amateurs: it’s the one night each year with ideal conditions to try and spot all 110 of the deep space objects in Charles Messier’s catalog.

We’ve got a guide on how to “run” the Messier Marathon; it’ll be updated for 2021 in the next few weeks so mark your calendars and bookmark that page!

It’s been 15 years since the first dwarf planets were recognized; it seems like a good year to try and see some them!

Start on the night of April 17th, when Haumea is at opposition. On this night, unusually shaped Haumea (artist’s impression above) will be at opposition and appear it its brightest of the year. A waxing crescent moon won’t interfere withy our ability to see Haumea; use a telescope or binoculars to look for this dwarf planet in the constellation Bootes.

While you’re out looking for Haumea, don’t miss another fascinating astronomy event: the lunar occultation of Mars on April 17th.

A lunar occultation is when the moon passes in front of another planet – it’s the planetary equivalent of a solar eclipse. Just like eclipses, lunar occultations are visible from only a small area on earth when they occur. This occultation of Mars will be visible only from parts of southeast Asia.

I always love writing about the Lyrid meteor shower; it occurs on the night before my birthday, so it’s like the 2021 night sky is celebrating with me!

Caused by comet Thatcher, the Lyrids occur from April 16th-25th each year. In 2021, they’re expected to peak on the night of April 22nd. The Lyrids typically produce a Zenith Hourly Rate (ZHR) around 18 on the night of peak activity; it’s not as much as showers later in the year but is still considered to be one of the major meteor showers.

Look for them from the radiant point in the constellation Hercules; this will be visible most of the night for stargazers in the northern hemisphere. Here’s my complete guide to seeing the 2021 Lyrids Meteor Shower with additional tips.

The blood moon – caused by the earth’s umbra passing over the face of the moon – will be visible across parts of Eastern Asia, Oceania, western North America, and southern South America.

As they always do, eclipses come as duos (and sometimes triads); that means that two weeks after the total lunar eclipse, there’s a solar eclipse – in this case an annular solar eclipse.

On June 10th, there will be an annular solar eclipse visible from the far northern hemisphere. Annularity will cut a narrow band parts of northern Russia/Siberia and Canada’s Northwest Territories. You’ll certainly need to travel for this one!

For another dwarf planet viewing opportunity, mark your calendars for July 17th. On this night, Pluto is at opposition (we’re still bummed Pluto lost planetary status, no matter what Neil Degrasse Tyson says…).

Pluto will be well-placed for viewing, reaching its highest point in the sky around midnight local time (no matter your location). Pluto will be in the constellation Sagittarius. So pull out your telescope or binoculars plus use a starfinder app to spot distant Pluto. It’s about 3.25 billion miles from earth in 2021!

Continuing the trend of gazing outward in the solar system, August 1st is another great night for grabbing your stargazing viewing aids: Saturn is at opposition this night. Beautiful, ringed Saturn will be well-placed and high in the sky around midnight local time on August 1st; it’ll be in the constellation Capricornus.

As we approach mid-August, we all know what’s coming: the best meteor shower of the year! While last year’s Perseids were somewhat effected by a roughly first quarter moon, this year’s waxing crescent moon will present no intrusion.

The Perseids meteor shower is caused by comet Swift-Tuttle, and occurs every year in August. The night of peak activity is usually between August 12-14; in 2021 it’s expected that the Perseids will peak on August 12th. On this night, you can look for up to 150 meteors per hour.

We have a whole guide to seeing the Perseids meteor shower; it will be updated for 2021 in early summer, so bookmark it!

After the fantastic Great Conjunction in late 2020, Jupiter and Saturn have been slowly moving away from one another in the 2021 night sky. For this reason, their days of opposition are several weeks apart in 2021.

On August 19th, Jupiter is at opposition – also in the constellation of Capricornus, so not far from Saturn. Jupiter will reach its highest point in the sky around midnight local time. This is a great chance to grab a telescope or binoculars and try to spot some of the Galilean moons.

October kicks off the busy season for meteoric activity on earth, starting with the peak of the Draconid meteor shower on October 8th.

The Draconid meteor is not usually worth planning to see, but some years it is exceptionally active. Caused by comet Giacobini- Zinner, you can check closer to the date to see if 2021 is predicted to be an ‘outburst’ year with extra activity.

Ready for another dwarf planet viewing opportunity? Here’s one: on October 17th, Eris is at opposition. Eris is the largest dwarf planet – the one that caused the entire reclassification of other large non-planetary bodies like Pluto and Ceres.

To spot Eris on its night of opposition, look for the dwarf planet in the constellation Cetus. You’ll need a telescope or binoculars to see Eris, but unfortunately a nearly-full moon on this night may interfere with your viewing prospects.

(The same full moon issue applies for Makemake when it reaches opposition on March 27th. That’s why we didn’t recommend that opportunity to see that dwarf planet.)

While the Draconids earlier in October can vary in level of excitement, we can always count on the Orionids to be a consistently enjoyable meteor shower.

Caused by one of the most famous interstellar voyagers, Halley’s Comet, the Orionid meteor shower occurs each year in October. The shower occurs from October 2nd to November 7th annually; the night of peak activity in 2021 is October 21st. On this night, you can look for up to 15 meteors per hour.

Like the lunar occultation of Mars earlier in the year, this occultation is only visible from a small area on earth. In this case, those in far east Asia, including eastern China, Korea, and Japan will have the best view. A waxing crescent moon will make it an even more picturesque viewing opportunity.

The penultimate major meteor shower of the year happens in mid-November. The Leonids meteor shower occurs from November 6th to 30th annually, and the night of peak activity is on November 17th in 2021.

Caused by the comet Tempel-Tuttle, the Leonids are a decent opportunity for seeing meteors streak across the sky. The maximum ZHR on this night is 15.

There’s time for one more dwarf planet viewing opportunity before year’s end: Ceres is at opposition on November 26th. Ceres is the largest object in the asteroid belt, and the only one rounded by its own gravity.

On this night, Ceres will appear at its brightest for the year. It will also appear high in the sky around midnight local time. Look for Ceres in the constellation Taurus.

(If you want other fun opportunities to try and spot Ceres, on January 10th, Ceres will appear in conjunction with Neptune; it will do the same with Uranus on June 4th. Grab your telescope for those dates too!)

Your best chance to stand in awe of our sun and moon will be on December 3rd – if you’re willing to travel for it. On this day, there will be the year’s only total solar eclipse.

This total solar eclipse will be visible only in Antarctica, so plan ahead if you want to book a cruise to this region. It’s a great chance to tick off two bucket list experiences in one trip, and there are a number of tour companies planning expeditions for the occasion.

We have a guide to seeing the next solar eclipse; it will be updated about six months in advance of this eclipse, so bookmark that page!

If you missed seeing Pluto mid-year when it was at opposition, here’s another chance. On December 12th, Venus and Pluto will be at conjunction and within 0°20′.

This is a fabulous opportunity to grab your telescope or binoculars and use Venus to find Pluto, since the two will be close enough to spot through the single view of either means of magnification. Look for both planet and dwarf planet in the constellation Sagittarius.

Last but certainly not least, the final great astronomy event you should mark your calendar for in 2021 is the Geminids meteor shower.

In 2021, the peak is expected on December 14th. On this night, you can expect to see up to 120 meteors per hour. We’ve got a guide to seeing the Geminids meteor shower that will be updated later this year – bookmark the page!

21. A Discovery Yet Unknown!

Unlike in years past, we have left the final spot on our list of the best astronomy events in the 2021 night sky open. Why? Because each year, astronomers around the world are studying, researching, and discovering new things that will be worthy of this list but we can’t predict.

Remember ‘Oumuamua in 2017? Or Comet Borisov in late 2019? And who could forget Comet NEOWISE that blew all of our minds in summer 2020! These kinds of discoveries remind us that astronomy is an active, dynamic scientific field – and new discoveries can be as exciting and worthy of our time as long-standing favorite astronomical events.

There’s no need to mark your calendars for this one, but hopefully you’ll be inspired to follow the news and maybe plan a few extra nights of stargazing to see what wonders you’ll discover too.

Have questions about these top astronomy events in the 2021 night sky? Let us know in the comments!