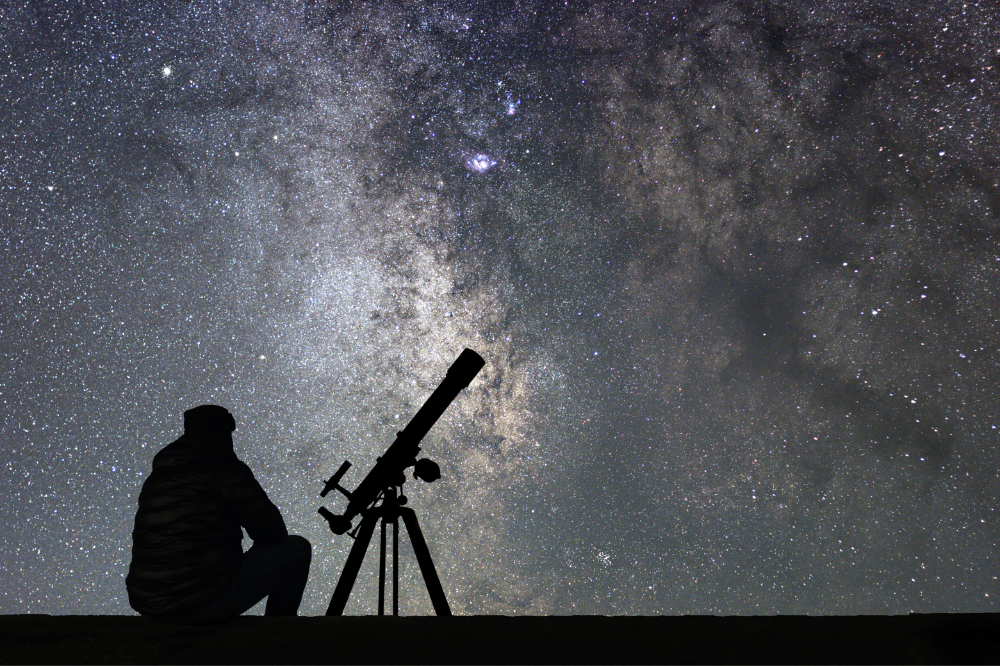 As you get more interested in astronomy, you might find yourself wanting equipment to level up your stargazing experience. After all, while our eyes are great tools for exploring the wonders of the night sky, they’re also severely limited. That’s why we spend literally billions of dollars to launch space telescopes like Hubble, Spitzer, and Webb… And why people invest in telescopes right here on earth.

Whether you’re buying your first telescope or ready to upgrade from an even cheaper (and likely less effective) telescope, I’m here to help. Making the leap up to a $100-$200 telescope will give you a lot more power to see into deep space, but only if you get a good one. That’s where this list of the best telescopes under $200 comes in!

Short on Time?
The best telescope under $200 is theGskyer 70mm Travel Telescope

Below you’ll find 11 budget-friendly telescopes that all come in at $200 or less (as of publishing; prices may vary when you read this!). Each one is a bit different, and has different features and capabilities. No matter which one you choose, you’ll likely be happy with how much further you can gaze into the solar system, galaxy, or universe.

Note: Lens and telescope prices have been very volatile in the past two years due to supply chain issues. Note that prices might vary widely from the prices I reported when this post was last updated in February 2022.

This post was originally published in September 2021, and was re-ranked and updated in February 2022.

What to Look for in a Great Telescope

As you compare the telescopes below – as well as any others you’re considering – keep in mind the following:

All this said, let’s dive into the list of telescopes under $200 that I recommend.

The Best Telescopes Under $200 (Ranked)

Keeping all those aspects in mind, I pulled together the best telescopes under $200 and ranked them. To come up with this ranking, I considered price, popularity, and review scores from Amazon.com. Here’s the list I came up with, using updated data for 2022.

Read on to learn about each of these telescopes under $200 in greater detail.

Sitting toward the lower end of the scale, the Gskyer 70mm travel telescope is an unbeatable option for stargazers with a tight budget. It includes fully-coated optics, 400mm focal length, and 70mm aperture, which provide clear and high-resolution images of celestial bodies.

As for magnification, the package includes two extra eyepieces of 25 mm and 10 mm plus one 3x Barlow lens, reaching a magnification of 120x.

The Gskyer is also one of the best options if you’re into astrophotography. The telescope includes a wireless camera and remote and a smartphone adapter to take pictures of the distant sky.

The Celestron 70mm travel scope is one of the best telescopes under $200. It’s an excellent option for stargazers who are always on the move and need a lightweight telescope; it only weighs 3.3 pounds!

The telescope features fully-coated glass optics and a 70mm aperture, which provides brighter views of the cosmos. The set also comes with two high-quality eyepieces (20mm and 10mm) that provide low and high-power views of celestial objects at night and terrestrial objects during the day. There’s also an erect image star diagonal, a finder scope, a lovely traveling backpack, and an adjustable tripod.

Thanks to its refractors design, the Celestron is also one of the best beginner telescopes for children or amateurs, making it easy to set up and use. The only drawback of the Celestron is the tripod. Although it’s portable, it isn’t very stable.

Built with an intuitive setup system, the Celestron Astromaster 70AZ is another of the best telescopes under $200 on the market.

While it’s not the highest-powered telescope, the Celestron Astromaster comes with an aperture of 70mm and magnification of 45x to 90x. At this magnification level, stargazers will be able to get a spectacularly good view of the Moon, see Mars close enough to distinguish some color, witness the magic of the Galilean moons, and appreciate Saturn’s rings clearly defined.

Despite its low price, this telescope is quite sturdy and well made, with durable, professional, high-quality components and materials. Last but not least, the Celestron Astromaster is super lightweight and portable, weighing just 11 lbs.

If you’re a novice with a tight budget, the Celestron PowerSeeker 70AZ Telescope is one of the best low-budget telescopes in the market.

Stargazers love it because it features a perfect combination of quality, price, functions, and power. A refractor telescope, the Celestron features a yoke mount with a slow-motion altitude rod to ensure a smooth and accurate pointing.

It also includes an erect image diagonal, two extra eyepieces (4mm and 20mm), plus a 3x Barlow lens to triple the power of each eyepiece. It also comes with a 5×24 finderscope to help you center objects. At 5.85 pounds, the telescope it’s still highly portable. The good news is that despite being lightweight, its materials are sturdy and durable.

The Orion Observer 70mm II AZ Refractor is one of the best sub-$200 telescopes for beginners – and the cheapest one on this list.

With a 70mm achromatic glass objective lens and 700mm focal length, the Orion Observer will bring the distant sky closer to you than ever before. The pack comes with plenty of accessories, including two 25mm and 10mm 1.25″ Kellner eyepieces, a red-dot sight, 1.25″ rack and pinion focuser, 90-degree star diagonal, and the Orion MoonMap 260. The Orion Observer is powerful enough to let you see Jupiter’s streaks, Venus, and the Moon.

To enhance your stargazing experience, you can consider adding Barlow lenses, moon filters, and other accessories. Like most beginner telescopes, the Orion Observer’s setup is quick and easy.

The Zhumell Z114 Portable Altazimuth is the last on our list of best telescopes under $200 – but it’s only here because of the order of the alphabet, not the quality of the telescope!

The Zhumell comes with many high-end features you won’t find in many telescopes within this price range. Its top feature is the 114 mm parabolic primary mirror parabolic mirror. This parabolic mirror provides sharper views because it eliminates spherical aberration and other visual defects. It also collects over 90% light transmission to provide consistently brighter views of fainter objects like nebulae.

Built with a lightweight yet durable design, the Zhumell will be your number one companion in all star parties or camping trips. It is very easy to transport and to set up as well. Other accessories include a red dot finderscope and two fully multi-coated eyepieces, a 17 mm eyepiece with 24x magnification for wide-field views, and a 10 mm eyepiece, with higher 40x magnification.

If you don’t want to deal with shaky tripods, then the Zhumell Z100 is the way to go.

A tabletop reflecting telescope, the Zhumell comes on a Dobsonian-style mount, so you can be sure it won’t move during your stargazing session. It’s one of the most powerful telescopes on the list, with a 100 mm parabolic glass objective lens, a highly unusual feature in telescopes of this size. Parabolic mirrors provide sharper views because it removes visual defects like spherical aberration.

The package also includes two interchangeable eyepieces, 17 mm and 10mm, so you can change magnification depending on the viewing situation. It also comes with a 1.25” focuser and a red dot finder. It weighs 5.25 pounds, so it’s a little bit heavier than most telescopes I’ve mentioned here. Still,  it’s super lightweight and easy to carry.

Moving out of the AstroMaster family, Celestron has several other great telescopes under $200, and the Inspire 70AZ is one such option.

The Inspire 70AZ is easy to set up, and comes in under 18 lbs. This makes it among the lightest Celestron on my list, great for relocating for star parties or stargazing trips beyond your backyard.

In addition to standard accessories, this telescope also comes with a smartphone adapter – always a crowd pleaser and a great way to share photos from your best stargazing sessions.

The best features of this telescope are its user-friendly mount design and its excellent magnification power, which you can increase using the extra eyepieces. Thanks to its manual German Equatorial mount design, the PowerSeeker 127EQ provides flexibility and portability. With the PowerSeeker 127EQ, you’ll enjoy crisp images of Saturn’s rings, clear views of the Moon’s craters, beautiful glimpses of the Galilean moons of Jupiter, and many other celestial objects and sights.

For a bit more power in the Inspire family, consider the Celestron Inspire 80AZ.

Moving out of the AstroMaster family, Celestron has several other great telescopes under $200, and the Inspire 80AZ is one such option.

As its name suggests, it has an 80mm refractor with a fully coated lens. Its frame is lightweight, weighing just under 17 lbs, and you can easily set it up with no tools. This affordable telescope also has an adjustable tripod, an accessory tray and a red LED flashlight that comes in handy during any stargazing session.

Lastly, the Celestron Inspire 80AZ has panning handle control that enables you to firmly secure your telescope.

The PowerSeeker 114EQ is sure to take you on a trip across the universe, thanks again to Celestron.

This Newtonian telescope is also one of the best budget telescopes for beginners. With the PowerSeeker, stargazers can enjoy higher-powered magnification and light collection; it also comes with two eyepieces and a 3x Barlow lens to vary the magnification levels.

This telescope features a manual German Equatorial mount paired with a slow-motion altitude rod for smooth and accurate pointing. While this is an excellent mount style, newbies will need some time to get the hang of it. The large design is the only downside of the PowerSeeker. Weighing in at 18.9 lbs, this telescope isn’t the best choice for traveling stargazers.

The Celestron 80mm Travel Scope is the number one beginner telescope for stargazers who travel a lot. 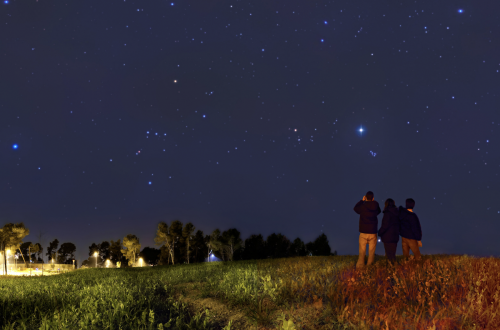 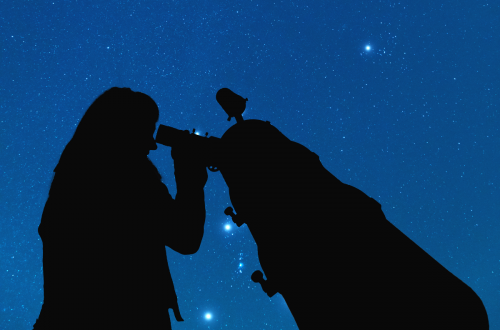 The 10 Best Computerized Telescopes at Every Price Point (2022) 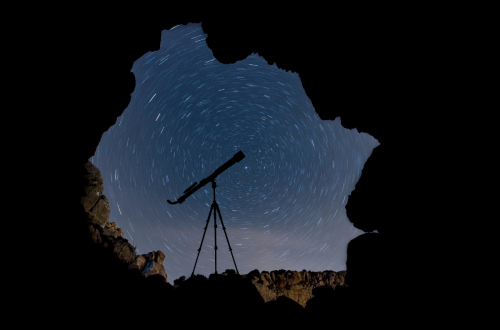 The 6 Best Stargazing Telescopes for Every Budget (2022)