Our lunar legacy is more important than ever as we mark the 50th anniversary of mankind’s first steps on the moon. Both NASA and private companies now have their sights on the moon. The best way to prepare for these missions is to learn from those missions that have been there before.

All of the Apollo mission Command Modules (CMs) are on display to the public because of their importance to human history. These CMs are often the cornerstones of extensive aviation, aerospace, and space museums. They help educate visitors about the lessons learned by the Apollo astronauts and technology we built to help them reach the moon.

Read on to learn more about each of these CMs, a brief recap of their missions, and where you can see the Apollo Command Modules.

This post was originally written in July 2019, and was updated most recently in January 2023.

Apollo 6 was the final unmanned test of the Saturn V rocket and final unmanned Apollo test mission. In particular, NASA wanted to test how the Saturn V performed a trans-lunar injection (maneuvering to reach the moon) and how the command module heat shield would perform on re-entry. As evidenced by the rest of the Apollo missions, this April 1968 test was a success!

Today, you can see the Apollo 6 Command Module on display at the Fernbank Science Center in Atlanta, Georgia. You can also visit the Jim Cherry Memorial Planetarium and go stargazing at the Ralph Buice Jr. Observatory which are also part of the Science Center.

The Apollo 7 Command Module is now permanently on display at the Frontiers of Flight Museum in Dallas, Texas. This unnamed Command Module has its own exhibit. The rest of the museum is filled with artifacts from aviation and aerospace history.

Each Apollo mission achieved historic firsts: Apollo 8 was the first mission to take men in orbit around the moon. Astronauts Frank Borman, James Lovell, and William Anders were the first humans to fly to the moon, and they took the famous ‘Earthrise’ photo during their mission. The Command Module served as their home for the six-day journey.

You can see the Apollo 8 Command Module on display at the Chicago Museum of Science and Industry in Chicago, Illinois. In addition to the Henry Crown Space Center where Apollo 8 is located, you can explore exhibits on transportation, future tech, and many more scientific fields.

While Apollo 9 did not go to the moon, it did pass a critically important milestone. Apollo 9 launched the Apollo Command Module, Service Module and Lunar Module atop a Saturn V rocket for the first time and testing the LM for independent maneuverability in low-Earth orbit. The Apollo 9 Command Module was also the first one to receive a name: “Gumdrop” after the CM’s bright blue protective wrapper during training and simulations.

The Apollo 9 Command Module is on display at the San Diego Air & Space Museum in San Diego, California. It is the only Command Module permanently displayed on the U.S. West Coast. Along with “Gumdrop,” you can view replicas of some of the Wright Brothers gliders, a mock-up of the Bell X-1 (designed for supersonic flight), and many more aircraft and spacecraft.

The Apollo 10 mission is generally referred to as the “dress rehearsal” for Apollo 11. Don’t let that understate its importance! In May 1969, Apollo 10 was the final and crucial test of all systems – including an orbit around the moon and the crew taking the Lunar Module to 15.6km above the moon surface. Astronauts Thomas Stafford, John Young, and Gene Cernan called their Command Module “Charlie Brown” and their Lunar Module “Snoopy” after the famous Peanuts comic characters.

You can see the Apollo 10 Command Module at the Science Museum in London, England; it is on loan from the Smithsonian National Air & Space Museum. All-American “Charlie Brown” is the only Command Module that is on display outside of the U.S. You can see the CM in the ‘Making the Modern World’ gallery, alongside a reconstruction of Crick and Watson’s molecular model of DNA and an Apple I personal computer.

We all know about Apollo 11 – it’s the first mission that took humans to the surface of the moon in July 1969! (Here’s our list of Apollo 11 50th Anniversary events, by the way.) Over an eight-day mission, astronauts Neil Armstrong and Buzz Aldrin set foot on the moon and cemented our lunar legacy as a species. Their successful mission was the first of six to land on the moon.

The Apollo 11 Command Module is on display at the Smithsonian National Air and Space Museum in Washington, D.C., the country’s most prestigious museum of its type. In addition to the CM, there are over 3,500 artifacts from the Apollo 11 including Neil Armstrong’s spacesuit. This is obviously the most famous of all the Apollo Command Modules.

Note: The Apollo 11 Command Module is currently on tour, and is on display at the Museum of Flight in Seattle through September 2019.

videosOften overshadowed by the missions before and after, Apollo 12 was the second moon landing and a perfectly nominal mission. That’s a very good thing when it comes to human space exploration! Astronauts Pete Conrad and Alan Bean spent almost eight hours on EVAs walking around the moon, collecting samples, and shooting some of the first color video on the moon. Afterward, they successfully lifted off from the moon to rejoin fellow astronaut Dick Gordon aboard the Command Module, “Yankee Clipper.” The CM was named as a nod to the three crew who were all U.S. Navy Commanders.

The Apollo 12 Command Module is on display at the Virginia Air & Space Museum in Hampton, Virginia. This museum is the official visitor center for NASA Langley. Other exhibits include the Mercury 14 spacecraft and the Solarium which allows visitors to learn more about our nearest star.

After Apollo 11, the Apollo 13 mission is the most well-known of the Apollo missions. Due to a critical hardware failure in the oxygen tank, Apollo 13 did not reach the surface of the moon; instead, the lunar landing was aborted in favor of a short journey to try and safely return the three astronauts to earth. Astronauts Jim Lovell (also Apollo 8), Jack Swigert, and Fred Haise had to abandon their damaged Command Module, “Odyssey,” during their five-day voyage, spending the majority of the time in their Lunar Module “Aquarius” instead.

Today, you can see the Apollo 13 Command Module on display at the Cosmosphere in Hutchinson, Kansas. “Odyssey” is located in the Apollo Gallery of the Hall of Space. You can also see a night sky show at the Justice Planetarium or watch a space movie at the Carey Digital Dome Theater.

Nearly a year after Apollo 13, the Apollo 14 mission kicked off to make up for the previous ‘mission failure.’ Astronauts Alan Shepard, Stuart Roosa, and Edgar Mitchell took a nine-day mission to the moon. Shepard and Mitchell spent over 33 hours on the moon – including over 9 hours out exploring the surface of the moon!

After three successful lunar landing missions, NASA used Apollo 15 to continue testing new technology. The Apollo 15 mission was the first to use a Lunar Roving Vehicle, aka a Moon Buggy, and the astronauts spent significantly longer on the moon than previous missions had. During the 12-day trip to the moon and back, astronauts David Scott and James Irwin spent almost three days on the surface of the moon and 20 hours doing EVAs while Alfred Worden orbited above in the Command Module, “Endeavor.”

You can see the Apollo 15 Command Module at the United States Air Force Museum at Wright-Patterson Air Force Base in Dayton, Ohio. The museum holds many exhibits of aviation and aerospace history, including the Space Gallery where “Endeavor” is housed. There are several other aircraft, spacecraft, and satellites on display too.

The Apollo 16 mission lifted off in April 1972 and lasted over 11 days during which the crew spent over five days orbiting the moon. Astronauts John Young (also Apollo 10) and Charles Duke spent nearly three days exploring the lunar surface, again aided by a Moon Buggy. Named for the friendly ghost, the Apollo 16 Command Module was called “Casper.” This was because of the white Teflon suits worn by the crew which looked shapeless on television screens.

The final moon mission, Apollo 17, took place in December 1972. It was the last time humans left low-Earth orbit in the past four decades and remains the longest that we’ve spent away from earth and on the moon. In their mission, astronauts Gene Cernan (also Apollo 10), Harrison Schmitt, and Ronald Evans orbited the moon for six days, spent over three days on the lunar surface, and clocked over 22 hours of EVAs. Their Command Module was named “America” for the country that made it all possible.

Have questions about visiting these Apollo Command Modules? Let us know in the comments!

How to Plan a Trip to See a Rocket Launch 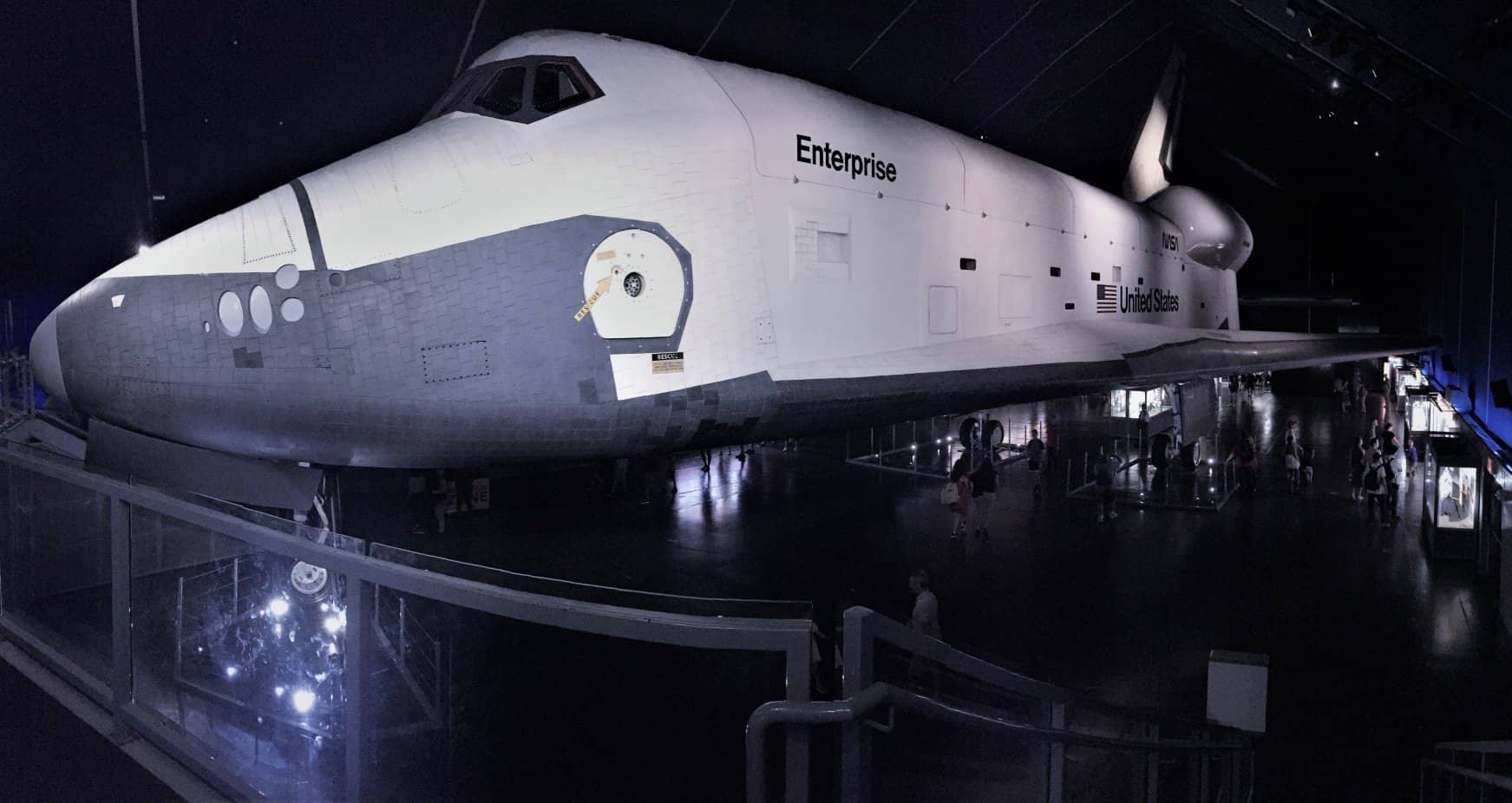